BRIAN: Here we are again with the second film of Mr. Wesley Wales Anderson, a little gem by the name of Rushmore.

This was the first time I watched it and, oh boy, it’s a leap forward. I guess I shouldn’t be too surprised given where Anderson’s career goes, but it was shocking to see how sophisticated this movie is compared with Bottle Rocket. The visuals are strong, the humor comes flying at you fast, and the characters forming the sides of Rushmore‘s fucked-up love triangle are beautifully sketched.

Most exciting, though, was the film debut of one Jason Schwartzman, who would’ve been around 17 when they made the film. What are your thoughts on Schwartzman’s performance, Danielle, as well as initial thoughts on Rushmore?

DANIELLE: I completely agree. This movie is very different from Bottle Rocket in various ways but, most noticeably, it has a more developed story and, overall, is just made better (which is interesting given that these movies were released two years apart.) Did Wes Anderson take a film class or something? Kidding, kidding.

This movie is also pretty big for Wes Anderson in that we don’t just get Jason Schwartzman but it also gave him Bill Murray. I can imagine that Murray wouldn’t have been an easy catch for this, but I couldn’t imagine the role of Mr. Blume going to anyone else.

Also similar to Owen and Luke Wilson in Bottle Rocket, it’s impressive that Anderson can just cast people with no acting experience in his lead roles and it all works out.

BRIAN: This time especially. Jason Schwartzman blows Owen and Luke Wilson out of the water. The Wilson brothers got more comfortable in front of the camera as their careers went on, but it feels like Schwartzman debuts fully-formed as an actor. His performance as Max Fischer is layered. Most of the time, Max is putting on an act for the people he’s talking to, but there are scenes that require him to be emotionally raw. Schwartzman nails both.

For instance, his scenes with the headmaster, Dr. Guggenheim, are my favorite scenes in the movie. It’s a very Dennis the Menace/Mr. Wilson relationship (which is weird since the kid actor from Dennis the Menace is in this movie). When Dr. Guggenheim comes out of the chapel, he doesn’t have to turn around to see who’s accosting him. He knows it’s Max. It’s always Max. Dr. Guggenheim even gets the line in the movie that nails down the Max Fischer character who, until then, seems like the stereotypical academic overachiever.

GUGGENHEIM: He’s one of the worst students we’ve got.

That’s right, Max is a terrible, awful, never-seen-an-A-in-his-life student at Rushmore and, after an ace montage by Anderson, we realize he’s too caught up in extracurriculars to waste his time studying. Why do you think Anderson made Fischer a terrible student, Danielle, instead of making him brilliant à la Reese Witherspoon in Election?

DANIELLE: I totally agree. Jason Schwartzman was definitely able to create a complex character right off the bat, which made Max really interesting. Must be the Coppola blood flowing through his veins. I also like that Anderson doesn’t create one-dimensional characters or even traditional characters. People aren’t just good or bad, smart or dumb, slackers or hard workers. They are more complex, which is sometimes surprising in Wes Anderson movies where, stylistically, things seem fun and light.

I like that Max is not a Tracy Flick-type character. I think it shows his sense of entitlement and makes him even more pretentious. At least Tracy could back up her over-the-top nature because she was striving for perfection in all aspects of school. Here is this guy who is not a slacker at all so he could easily apply his determination to his studies but he chooses not to. Rather than studying, he writes a terrible play. Rather than getting good grades, he starts up random clubs. He often seems pretty delusional.

One thing that I thought about a lot when watching this was the theme of how teenagers are presented in movies. Oftentimes, we see very mature teenagers who talk in these intellectual ways, unlike real teenagers, and that can be distracting. If you are going to present a teenager as your protagonist, acknowledge the immaturity that comes with that age. At first I thought that Max was falling into that unrealistic territory fast. However, I think Anderson does a good job allowing him to talk like an adult and engage in adult activities while highlighting his immaturity. His lack of understanding in his relationship with Ms. Cross is a good example:

CROSS: Has it ever crossed your mind that you’re far too young for me?

MAX: It crossed my mind that you might consider that a possibility, yeah.

We also see him lying about little things like hand jobs just to prove himself to people. It seemed like throughout the movie we are seeing this internal battle in Max over who he wants to be and who he actually is at his young age.  Any thoughts on that? Do you feel like Max was actually a believable teenager or is Wes just creating a fantastical character for laughs?

BRIAN: I wouldn’t call Max believable, no, but that’s mostly because he exists in such a stylized world. BUT he has recognizable qualities (like the immaturity you mentioned) that make him compelling. He has no idea what the fuck he wants out of the Ms. Cross relationship. He only acts like he does, and the scene where she calls him out is the best.

MS. CROSS (after easily overpowering him as he tries to kiss her): What do you really think is gonna happen between us? Do you think we’re gonna have sex?

MAX: That’s a kinda cheap way to put it.

MS. CROSS: Not if you’ve ever fucked before, it isn’t.

It’s easy to feel sympathy for Max, knowing what it’s like to ache for belonging in an adult world. And Olivia Williams is flawless at conveying hidden pain as she tries to distance herself from Max. It’s a complex scene and, even though it’s taking place in Anderson’s artificial realm, the emotions feel honest.

In fact, it’s a big reason why I think Rushmore works on levels that Bottle Rocket doesn’t. Dramatic scenes, like the one above, work better, probably due to the acting (don’t hate me, Owen and Luke!) and the comedy is far better because of the editing. The editing in this movie is waaaay faster-paced, allowing time for more jokes and less time for awkward lingering. And it keeps the story zipping along.

Regardless of the pacing, Anderson still likes his spectacle. Which ending did you prefer, Danielle? The ill-fated heist in Bottle Rocket or the best play in all of recorded history in Rushmore?

DANIELLE: Rushmore, for sure. This movie just has so much more going for it that by the time we see this play we get some closure. For Bottle Rocket, the plot was so scattered that when the failed heist (was that supposed to be the climax of that movie??) happened it didn’t feel like the end of the story. It kind of felt like the movie just needed to end.

Rushmore had more of an ending. We see Max getting the glory that he wanted. The play was also ridiculous but fit the tone of the movie.

Which movie did you prefer overall? 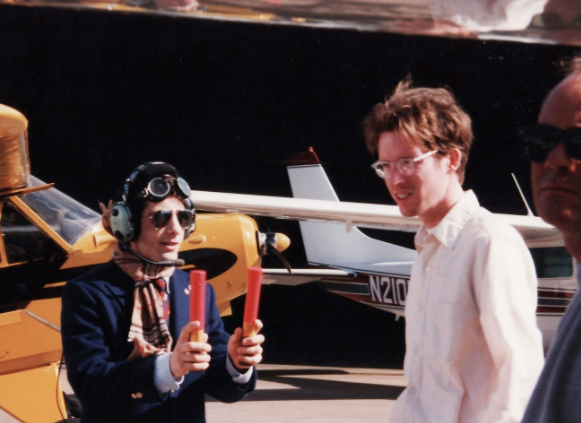 BRIAN: Bottle Rocket‘s got heart, I’ll give it that, but I’ll resoundingly go with Rushmore. The technical side of filmmaking (cinematography, acting, writing) is much improved as well as the unquantifiable side (emotional honesty, comedic timing). Anderson seems to have taken practical lessons from his first feature and challenged himself creatively to boot.

Clearly, Anderson’s drawn to stories about oddballs (Dignan, Max Fischer, etc.) but a distinct feeling I had while watching Rushmore was melancholy. Both films have this kind of silent aching in them. Dignan wants to belong to a cabal of thieves and Max yearns for Ms. Cross. It’s a little deflating to see characters desire something that the audience knows is bad for them. Despite the humor present throughout the film, I couldn’t shake off the sense of melancholy (which was probably augmented by the eternal autumn of the film).

Is there joy to be found in Wes Anderson? I think so, but not undiluted joy. Max’s youthful love is unrequited, Dignan’s victory at being an outlaw is pyrrhic. Joy mixed with sadness. Melancholy mixed with a scene where Bill Murray is stung repeatedly by bees.

Which regrettably means this convo is coming to an end. Any final thoughts on Rushmore, Danielle? I assume you preferred it to Bottle Rocket?

DANIELLE: Totally agree. I weirdly didn’t feel like I was rooting for the protagonists in either story in the sense that I didn’t want them to actually get what they desired. They were both likable and I wanted things for them to work out but it wasn’t necessarily that I wanted to them to achieve their goals because like you said, both of them didn’t actually want something that was good for them.

I do agree with you. I feel like even with the whimsical visuals of Anderson’s movies, the stories aren’t actually happy. It is very much sadness in a red beret.

Yes, if I’m gonna have to choose, I’m going Rushmore. The story and even quality of the film are noticeably more developed. Also J.Schwartzman is a dream. We can’t just ignore that.

BRIAN: Indeed. J. Schwartzman is a dream. But, as with all dreams, eventually cold water will be splashed on our sleeping faces and we’ll be thrust unceremoniously into consciousness.

As always, the Sarris Wheel spins on!

ABOUT THE AUTHORS: Danielle and Brian have been frenemies since their college years. Although Danielle is burning the midnight oil in Chicago next to Mrs. O’Leary’s cow and Brian is experiencing delusions of grandeur in Los Angeles next to giant white letters, The Sarris Wheel has reunited them at last. 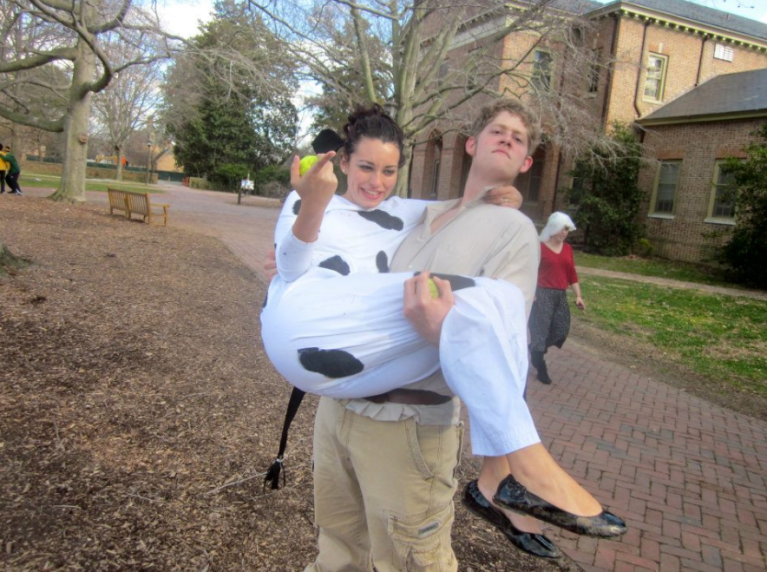 Kick back with Danielle at her blog, Wild Night In.