Ah, listen to that calliope music whistle through those supernaturally shrill pipes. That can only mean one thing. It’s time for another edition of the Sarris Wheel. So, step right up, I’ll give you a second to affix the safety railing to your waist and…off…we…go!

As we’re launched dangerously into the stratosphere, take a second to fondly recall our last stop, The Lodger. I’m getting chills just remembering the terrifying manhunt for the Avenger or the desperate plight of a man wrongly accused. Or how about Ivor Novello’s dreamy yet ghoulish but heartbreaking visage as the titular Lodger. Well, you didn’t have to wait very long to see his face again.

That’s right, our next stop is Alfred Hitchcock’s second and final collaboration with Novello, a film adapted from Novello’s own stage play. So please gingerly place your striped school caps on your heads and follow me down this conveniently-placed, metaphorically symbolic escalator. We’re getting ready to journey Downhill.

A brief note: The Sarris Wheel is somersaulting through Hitch’s oeuvre not willy-nilly, but in a precise one-at-a-time fashion. If you want to fully enjoy the journey, I’d recommend watching each film before reading its corresponding entry.

The feature in question is Downhill, written by Eliot Stannard and adapted from the play “Down Hill” by Ivor Novello and Constance Collier.

Downhill’s plot is paper-thin and its characters are wispy sketches of real people, usually with only a singular good or bad trait in their possession. The sole purpose of the story seems to praise the virtue of its main character, Roddy, for his loyalty, while bombarding him with Job-esque trials and tribulations. Perhaps Roddy’s struggles might encourage a viewer to think twice before they betray their best friend who’d lose his scholarship if it was discovered he’d knocked up a lower-class broad who’s actually blackmailing you because you’re a fabulously wealthy high-school rugby player who’s this close to winning the…whoa boy, this got unrelatable real fast.

I don’t need to go on about the faults in the film’s story. Hitchcock himself was hip to its many flaws, blaming it partially on the source material. He remarks that Down Hill “was a rather poor play…the dialogue was pretty dreadful in spots.”* So what are we even doing here? Is it worthwhile discussing something that was an artistic failure even in its time? Is going through a director’s oeuvre movie-by-movie a mistake and maybe you should’ve listened to your Mom and just taken those accounting classes in college because balancing a checkbook is a marketable skill and maybe by now you’d have a job that I could tell the ladies at book club about between sips of rosé and conversations about The Girl on the…whoa boy, this got unrelatable real fast.

In short, yes, Downhill has merit, because when Hitchcock listens to a play with dreadful dialogue, he’s actually imagining a movie with fantastic images. He sees a man’s descent into poverty and madness as an opportunity to optically engage movie-goers.

There are three specific instances in the film I’d like to single out for Hitchcock’s visual creativity. The first occurs at the story’s inciting incident, when Roddy slowly realizes how well and truly his goose is cooked. The scene begins as Roddy and Tim are summoned by the Headmaster for an unspecified reason. Hitchcock films the scene less as a walk to the principal’s office and more as an inevitable trudge to the gallows.

Hitchcock uses wide framing in the hallways to make the schoolboys appear miniscule in the frame. They’re mice scurrying toward their punishment. Once inside the headmaster’s office, Hitchcock uses menacing tracking shots that lunge straight at the headmaster, who may as well be a judge waiting to deliver a sentence. Without the use of intertitles, Hitchcock manages to convey a sense of dread and inevitable punishment that makes the admittedly shoddy plot machinations feel real in the moment.

The second notable scene does a brilliant job of predicting and sidestepping audience expectations. After leaving his father’s house out of contempt for being labelled a liar, Roddy is shown in a closeup in a tuxedo at a social event with a sizable grin. He’s done what any wealthy teenage runaway would do. He’s living the high life. 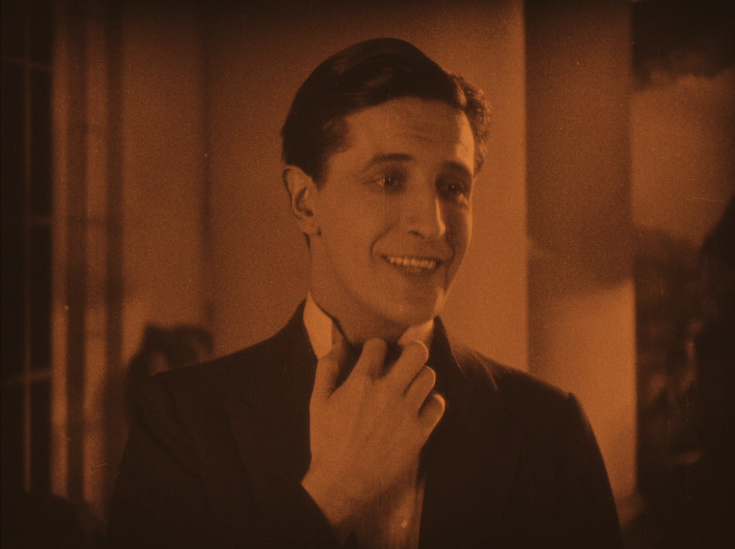 Except the scene zooms out, revealing Roddy’s not in fact living the high life as much as he’s serving it. His white bow tie, apron, and tray are revealed, marking him as a waiter at a restaurant. At this point, audiences in the 1920s are supposed to clutch their pearls and decry how low he has sunk. Well hold on hypothetical audience members…

Because the scene zooms out again, revealing Roddy to be a minor actor in a stage play in which he’s playing a waiter. Hitchcock places him in an almost-forgotten corner of the frame as he pans to a laughing audience, a full orchestra, and a chorus line of dancing girls. Hitchcock subverts the audience’s desire to see Roddy enjoy himself socially or even have a half-respectable job of a waiter. He’s about as low as they come. He’s an actor. 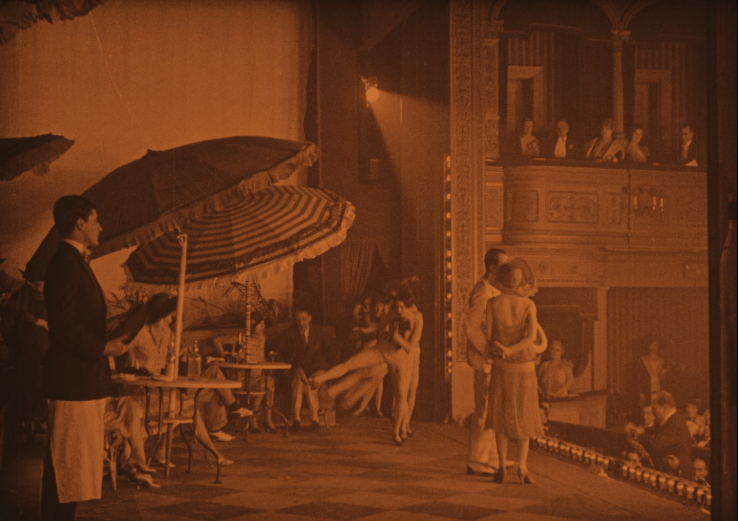 However, this narrative sophistication is outdone later in the film with unprecedented raw, visual flair. Roddy finally works up the courage to talk to Julia, the main actress in the play as Archie, his romantic rival, decides to fix a drink. As Roddy awkwardly talks to Julia in the background, Archie squeezes a bottle of soda water in the foreground resulting in the very first premature ejaculation joke in British film history. 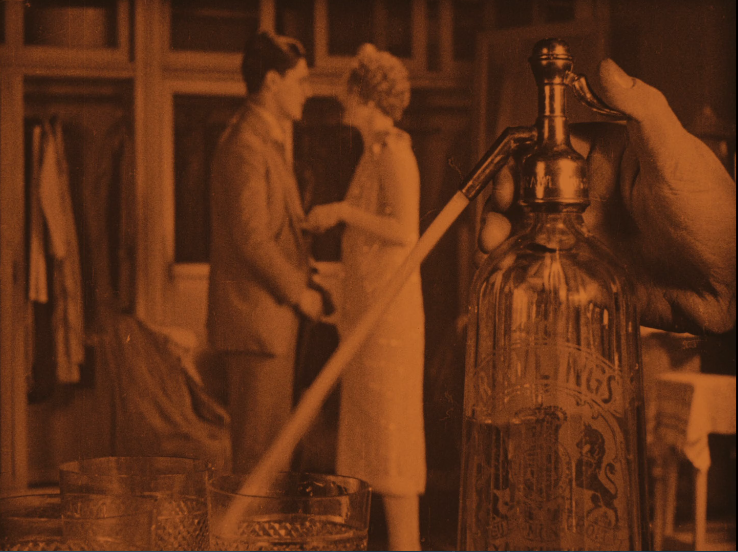 I jest, I jest. Not about the premature ejaculation joke. That’s in the movie and may very well be the first in British film history, but the last notable scene I want to comment on is far more nightmarish. After finding a note in Roddy’s pocket, two French sailors think they might get some money if they take him back to England. Roddy is destitute, filthy, and partially insane. He’s thrown below decks in a ship and experiences a climactic delusion that wouldn’t be out of place in The Lost Weekend.

A nearby sailor suddenly turns into a demented version of his father. Soon after, all the characters who’ve plagued him throughout the movie appear in the corner of the room, divvying up their ill-gotten spoils. At one point, Roddy cries out and all of them point and laugh in his direction.

After the more comprehensible imagery, Hitchcock hits us with a deluge of visceral imagery. Roddy’s face is superimposed with an image of the ship’s internal engine pounding which in turn is superimposed with the image of a spinning record player, recalling a brief moment of happiness from earlier in the film. An orchestra plays and Roddy’s dancing with a ghoulish woman in a purgatory dance hall. When speaking with Truffaut, Hitchcock himself talks about the sequence’s innovation:

“At the beginning of his nightmare he was in a dance hall. No dissolve, just straight cutting. He walked over to the side wall and climbed into a bunk. In those days dreams were always dissolves and they were always blurred. Through it was difficult, I tried to embody the dream in the reality, in solid, unblurred images.”

The whole thing plays like a fucked-up version of the end of a Gene Kelly musical. Hitchcock ties in themes and characters we’ve encountered throughout the film but in a more surreal fashion, letting the viewer feel the emotion instead of having it spelled out through plot.

All in all, Downhill is a narratively lousy work with a few outstanding visual accomplishments. The message of the movie basically lays out why a person’s worth is based entirely on social class. If you’re not rich, you’re either a lecherous lush or a venal villain waiting to be someone else’s predator or prey. It’s a condescending version of the “wrong man” tale without an arc for the main character or a proper resolution to the story.

Roddy manages to find his way home where, through no effort of the protagonist, his parents have discovered his innocence and welcome him back to high society with open arms. There’s even a shot of Roddy in his family’s foyer in the last scene of the movie that’s identical to a shot from the beginning of the film. Perhaps it’s Hitchcock’s unsubtle way of telling you how little Roddy has changed over the course of the narrative. He’s a bit grimier, but he still longs for his father’s affection and still wants to play for his rugby team, the “Old Boys”. Ivor Novello was 34 when he made the film, playing a high schooler two decades too late, so at least Roddy got what he wanted. He could very well call himself an old boy.

Finally, I would be remiss if I didn’t thank the Criterion Collection for releasing Downhill on Blu-ray from the stunning BFI restoration. Without them, Downhill would’ve been skipped by the Sarris Wheel entirely and, my goodness, what a travesty that would’ve been. The Criterion Collection included the film as a bonus feature on The Lodger release, which fulfilled my dreams of seeing every handsome nook and swoon-worthy cranny of Ivor Novello’s face in my living room. Thank you, CC…you know me.

Next time (as I erroneously stated last time) we’ll be discussing high-society drama. Order your butler to fire up the projector and splice together the reels for Easy Virtue.

And remember, as always…the Sarris Wheel spins on!

*“Hitchcock/Truffaut” is a book detailing François Truffaut’s 1962 interview with Hitchcock. It’s a fascinating read and goes through Hitchcock’s films one by one, partially inspiring this very Wheel.