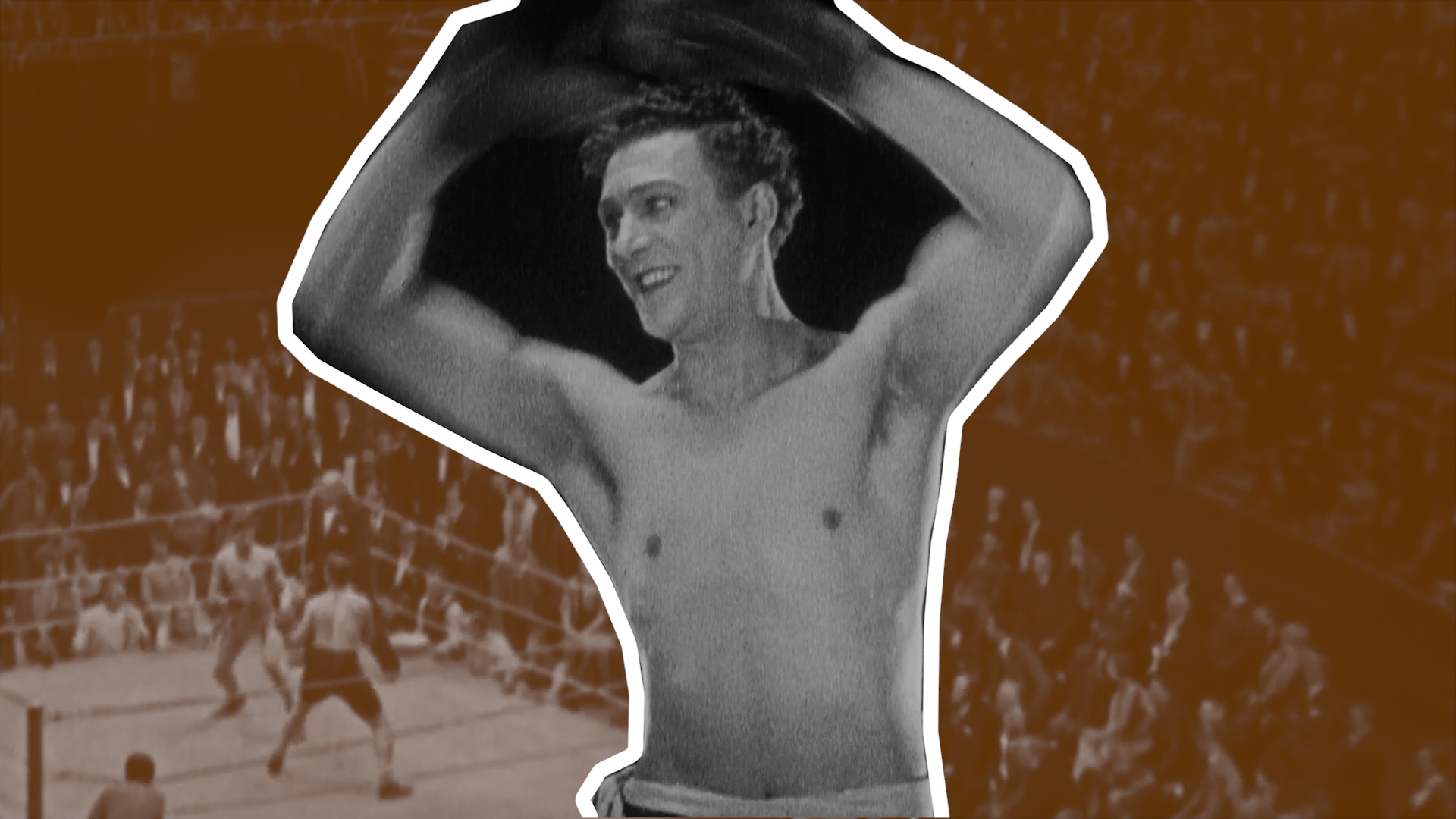 Hitchcock made a boxing movie? Yep, let’s discuss. Don’t get it confused with the horror movie of the same name. This Ring, from 1927, is a silent sports drama concerned with love triangles and rings with double meanings.

A lot of names are associated with the cinematic boxer. Sylvester Stallone, Michael B. Jordan, Robert de Niro…Alfred Hitchcock?

Believe or not, Hitchcock made a sports drama about men who wear gloves and fight for their loves. This week, we’re here to step into The Ring with the Master of Suspense…um, I mean, of course, the Master of Sports himself.

When last we met, we were witness for the prosecution in Hitchcock’s half-courtroom drama, half-slowly unraveling melodrama Easy Virtue. For his follow-up, Hitch switches it up with something that’s got comedy, drama, romance and, surprisingly, great action scenes.

But before we begin, let it be known that the Sarris Wheel is a slowly-moving satellite, traveling through space in a wacky, wildly bouncy fashion. But each bounce is carefully calculated because we’re going through Hitch’s filmography one by one and, to get the most out of your carnival ticket, I’d advise viewing each film before watching its corresponding video.

The feature of the hour is 1927’s The Ring, written by Alfred Hitchcock (with some uncredited help from Eliot Stannard).

At the outset of the movie, Hitchcock lets us know we’re going to have some fun. The story begins at an outdoor carnival and Hitch has some whimsical camera setups showing a raucous and wild atmosphere. Everyone is enjoying themselves, including our main character, who spies a beautiful ticket-taker across the way and falls in love at first sight, which Hitchcock emphasizes by superimposing Mabel’s face over the crowd. Immediately, we’re rooting for them as he walks over to her side of the carnival and they flirt with their eyes as a barker is trying to get people inside the boxing tent to watch a fight. These two crazy kids sure have a romance brewing fit for the…hang on, who’s this guy?

Oh, it’s One-Round Jack, the actual protagonist of the movie, chatting with his girl. Hitchcock pulls an interesting move here. A more classic Hollywood story would see a handsome, wealthy stranger rescue a woman from her ratty carny boyfriend and take her to the upper echelons of high society. Even a fair number of Hitchcock movies have the viewer side with rich people over the decidedly unhygienic and disgusting poor. But part of the reason The Ring stands out among Hitch’s silent works is that we’re meant to sympathize with Jack, who’s admittedly barely scraping by but he’s kind and has Mabel by his side…until Bob, the villain of the piece, picks Mabel out of a crowd to be his own.

It is a bit confusing that we see the movie through Bob’s eyes first, though. I’d like to take this opportunity to submit my grand cinematic theory I like to call Silver Screen Imprinting. The theory goes like this. When a movie starts, the audience is desperate to imprint on a protagonist, not unlike that annoying bird who keeps going up to different animals asking if they’re his mother. Like the bird, audiences need to be secure with the knowledge that they can emotionally latch on to someone for the next two hours and that a steady stream of yummy worms will be coming their way.

A cold open is fine. If it’s an action movie, the writer might introduce a villain first thing, or if it’s a science-fiction movie, you might get a huge information dump in the form of a text crawl. But I argue that it’s imperative to quickly let the audience know who they can imprint upon as the lead or leads. The Ring gives Bob a few minutes of screentime making lovey dovey eyes at Mabel before Jack shows up, thus letting the audience form a connection with him first. And there is a slim possibility that this is Hitchcock’s intention, to make the love triangle at the center of the story more interesting, but I’d argue it’s more of a structural mistake. The movie should’ve opened with Jack and Mabel and then shown a handsome stranger upset the delicate balance of their relationship.

And this is not to pick on Hitchcock. The Ring is overall a wonderful film, but it’s a mistake I see a lot of movies make. It might not be something you can quite pick up on when you see a story for the first time, but it can leave the audience with the feeling of being lost at sea for the first part of a film. And now I’ll stop chattering about grand cinematic theories, but my advice for all the filmmakers out there, introduce your protagonist early so us audience members know exactly who our mother is.

Back to The Ring!

Hitchcock came ready to leave his directorial mark. In the excellent book Hitchcock/Truffaut, he talks about the film’s visual flourishes:

“You might say that after The Lodger, The Ring was the next Hitchcock picture. There were all kinds of innovations in it, and I remember that at the premiere an elaborate montage got a round of applause. It was the first time that had ever happened to me. There were many things in that picture we wouldn’t do today. For instance, there was a little party one evening after a boxing match. The champagne is poured out and it is all bubbly. They drink a toast to the heroine and then discover she isn’t there, she’s out with another man. And so the champagne goes flat. In those days we were very keen on the little visual touches, sometimes so subtle that they weren’t even noticed by the public.”

Another visual touch that I enjoyed was the clever crossfade at the beginning of the film between Jack and Bob’s manager shaking hands and Bob and Mabel starting their affair. Jack is to be Bob’s sparring partner and Mabel his mistress. Bob is seducing both of them with his money.

It all leads to a darker part of the film where Jack becomes fed up with the arrangement. He hates that he has to put up with Mabel cheating on him to earn his paycheck. But can you blame Mabel? Bob’s a cool guy with lots of money and goes to cool parties where people dance like this.

Love the idea of cooling off the dancers like they’re boxers in their corner after a round of fighting.

It all leads to a frankly wonderful finale in the titular ring. Up until the climax, the movie’s been pretty spare in depicting boxing. There’s the fight at the beginning of the film, of course, but the rest of the movie focused primarily on the emotional relationships of the characters. The ending works so well because it’s just as emotional as it is brutal.

It has a great lead-up. Jack waits, Bob prepares, Mabel watches…and we’re off to the races. Jack and Bob wail on each other ruthlessly because they know the stakes are much higher than any boxing match they’ve ever fought before. They’re fighting for Mabel’s heart. The fact that so many other people are watching adds to the drama of the story.

It’s also of note how completely different this fight would be depicted in a 2022 remake of The Ring. Jack and Bob are in shape, absolutely, but they look like normal people, which I think lets the audience empathize with the characters’ pain a little bit more. A modern version of the story would see two hulked-out brutes going after each other, which is harder to relate to. Jack and Bob played by The Rock and Bautista, if you will. Not as emotionally satisfying.

But the way Hitchcock stages the fight is pretty electric. It goes on and on and he never stops adding in his clever visual touches. In an incredibly cathartic ending, Jack wins the match but only after Mabel has stated resolutely that she’s in his corner.

And then the film ends with (why not?), Bob alone in his locker room. One of his trainers found the gold bangle that he seduced Mabel with left unceremoniously at the ringside. I suppose it makes sense that we end the film with Bob since we started the film with Bob but if you ask me, it’s simply too much Bob. He’s a great villain, but the story should’ve ended a few seconds earlier with Jack and Mabel reunited. Overall, though, high marks for Hitchcock’s trip to The Ring.

On the next revolution of the Sarris Wheel, we’ll be discussing bucolic brides, so hop on your tractor and load up some feed because we’re going to meet The Farmer’s Wife.

And if you’d like more videos about directors both living and deceased, hit that Subscribe button to stay up to date on this channel.

Until next time…the Sarris Wheel spins on!