Bienvenue to the inaugural edition of The Sarris Wheel, your go-to source concerning movies and the directors that make them. More than an incredibly incisive series of articles or an old, creaky amusement park ride, I hope you, dear reader, will imagine the Wheel as an invitation to journey through the storied careers of cinematic artists, both living and deceased. Dust off a nearly-forgotten relic from the past or gaze anew at a recent masterpiece.

So feel free to hop on! All aboard who’s coming aboard.

As you secure the safety railing at your waist and the Wheel slowly gyrates off its axis, feel free to look around at metteurs en scène from past and present. Just over there, near that constellation shaped like a train. It’s the Lumière Brothers playing a game of chemin de fer baccarat. Oh, it looks like Louis is cheating.  And now Auguste has tackled him to the ground and…that’s not pretty. Moving on!

Rest your eyes over there, near that black hole. That’s David Fincher sitting in an H.R. Giger-knockoff armchair. Everybody wave to Mr. Fincher. What’s that he’s reading? Marquis de Sade? Moving on!

And now to the man of the hour, arguably the most celebrated director since the medium’s birth, Alfred Hitchcock. That’s right, the author of so many nightmares involving avian attacks and motel showers. He’s been called the Master of Suspense but, for now, he’s our first stop.

Quick note before continuing. The Sarris Wheel will be traveling linearly through Hitch’s oeuvre, one film at a time with spoilers aplenty. If you want to fully enjoy the journey, I’d recommend watching each feature before reading its corresponding entry.

Kicking off our Hitchcockian deep-dive is 1927’s The Lodger: A Story of the London Fog*, written by Eliot Stannard and adapted from “The Lodger” by Marie Belloc Lowndes. 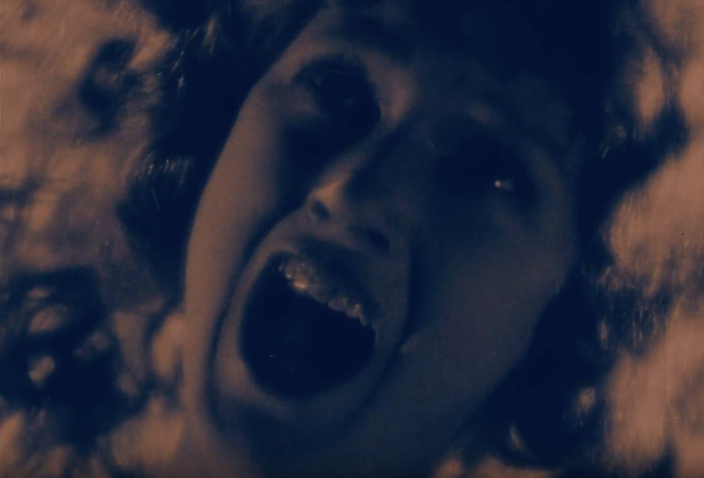 The movie’s opening shot, a blonde woman screaming, sends a clear message to the viewer for what’s in store. Hitchcock establishes a tone of fear and paranoia that would pair nicely with Fritz Lang’s M. Gradually, the film doles out important information.

Panic sweeps the streets of London. Multiple people pretend to be The Avenger, from a trench-coat clad idiot to a playful showgirl, each taking turns to scare the living daylights out of, respectively, an elderly eyewitness and a fellow burlesque performer. Perhaps it’s Hitchcock’s intent to prove that, even in times of crisis, people can still manage to be complete assholes.

Despite the mass hysteria, not everyone can be the killer. Enter Daisy, whose golden curls imply that she’s a natural victim. Although she first appears as a glamorous fashion model, it soon becomes apparent that she lacks pretensions. She’s assists her parents with the duties of their boarding house and politely entertains the admiration of a local detective. Her home life is quaint and cozy, a pleasant counterbalance to the frenzied streets outside. Perfectly quaint and cozy until…the Lodger.

In the best scene of the film, Ivor Novello’s titular character arrives at Daisy’s door (ominously labelled 13). At the same time, the light in the house flickers. Daisy’s father sets to work fixing the light as Daisy’s mother opens the door. Ivor Novello’s scarf-clad face fills the frame. Almost supernaturally, Daisy’s father tumbles from a chair and a cuckoo clock screams. Altogether, it’s a superb bit of staging and an incredible introduction. Novello, a matinee idol of the time and talented composer** dominates the screen. The Lodger is a sinister force, bringing the madness of the outside world within the orderly walls of Daisy’s home. He forces all the paintings of fair-haired women to be taken from his room and, in a visually impressive shot, paces so heavily that it causes a chandelier to sway, literally upsetting the peaceful status quo of the boarding house.

Hitchcock accomplished the shot by shooting the Lodger’s pacing through a plate-glass floor. The director says, “Naturally, many of these visual devices would be absolutely superfluous today because we would use sound effects instead. The sound of the steps and so on.”*** Constrained by the technology of the day, Hitchcock relies on crafting singular images to tell his story of London fog.

The most compelling imagery in The Lodger, though, is the struggle of the Triangle vs. the Circle. The Lodger finds himself associated with the triangle. The Avenger’s calling card is the three-sided shape and the Lodger ends up falling in love with Daisy, thereby creating a love triangle. The aforementioned swaying chandelier has three branches and the Lodger’s climactic grip on an iron railing is three-pronged. Bonus points go to the climax for prompting Crucifixion imagery which is, you guessed it, a three-pronged method of execution. 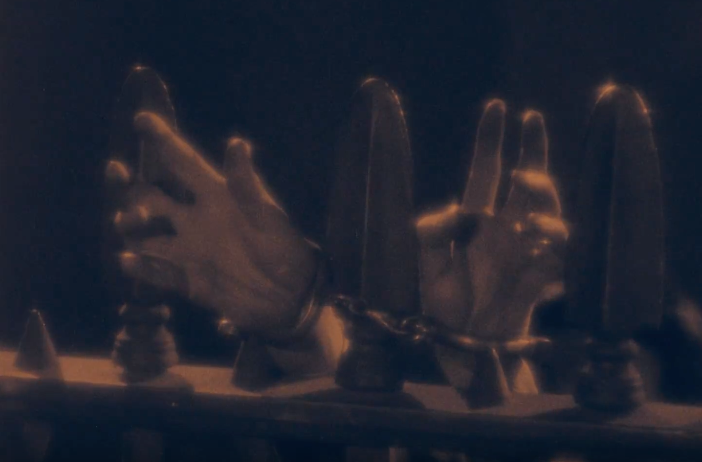 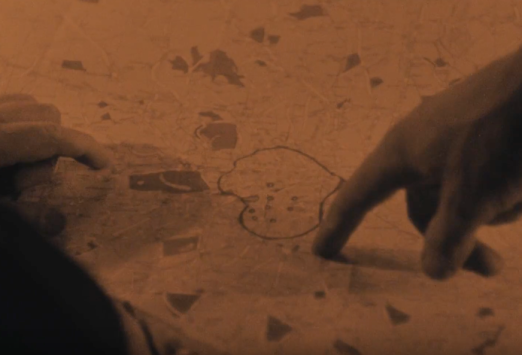 Joe, on the other hand, is almost gleefully associated with the circle. When charting The Avenger’s crime scenes across the city, he draws lazy circles indicating where the killer has struck, not as precise as the Lodger’s clean triangles. Joe’s mission in the film, which he states in the first act, is bizarrely focused on circles: “When I’ve put a rope round the Avenger’s neck, I’ll put a ring round Daisy’s finger.” The circle is simultaneously a death sentence for the Lodger and a prison sentence for Daisy. There’s even a scene where Joe “playfully” handcuffs Daisy on a stairwell, a gigantic neon warning sign indicating that he’s not exactly marriage material.

The Triangle and the Circle duel it out throughout the film and neither proves triumphant. The Lodger tells Daisy the truth. He’s not a maniacal serial killer and it’s weird that she would even think that. They manage to bat away the brutish one-sided circle and the murderous three-sided triangle. Together, they are a two-sided geometric shape (a line?) that can live happily ever after. At least until the next serial killer provokes a city-wide feeding frenzy.

Now, get your last looks in at the Lodger’s frighteningly pale, slightly effeminate, always intriguing visage, because we’re flying fast to Hitch’s next cinematic endeavor. Prepare your monocle and high society loafers because Easy Virtue is coming up next.

And as always…the Sarris Wheel spins on!

*By no means is starting with The Lodger an effort to upset completists. It’s technically Hitchcock’s third feature. His first, The Pleasure Garden, is unavailable in decent quality and his second, The Mountain Eagle, is a lost film. Really, you’re upset about it?  C’mon, neither of those had a Jack the Ripper surrogate. And Hitchcock himself said it was the first time he experimented with form or style. Eh? Eh? Ah, there’s that smile.

**Seriously, look this guy up. His life was fascinating and his career as a songwriter, composer, and one of the biggest British film stars of the late 1920s will make you feel like you haven’t accomplished anything in life.

***From “Hitchcock/Truffaut”, a book detailing Francois Truffaut’s 1962 interview with Hitchcock. It’s a fascinating read and goes through Hitchcock’s films one by one, partially inspiring this very Wheel.